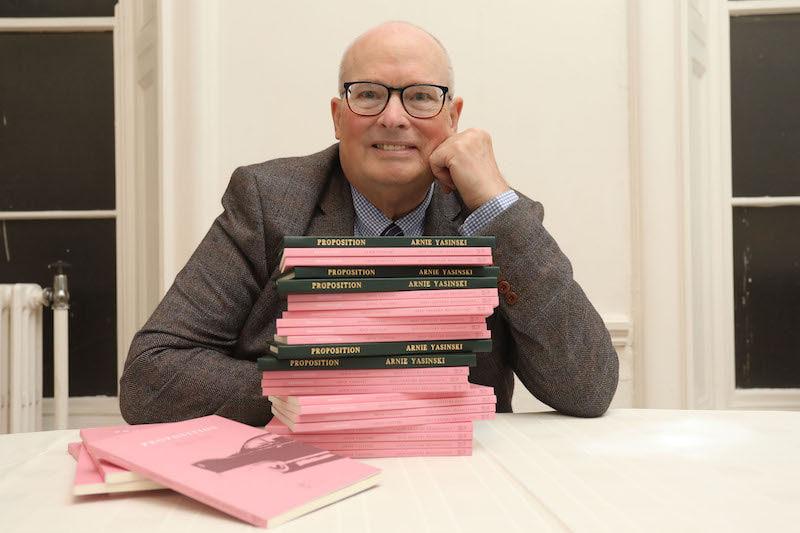 American poet, Arnie Yasinski, was born in 1948 and is now living in Ireland.  This collection written over 20 years finds Arnie playing pool as a teenager with a wounded veteran in the VA town where he lived, then married at 19, divorced, and living through the inescapable mid-life crisis. Now living in Ireland with his Irish wife, he’s more conscious than ever of the inevitable. Full of longing, quintessentially male, honest, and aware, these poems will bear reading again and again.  Arnie’s Yasinski’s proposition is uncompromising: this is him, as he is, unique yet a refraction of all men.

As one of the higher apes,
libido smoldering like the map
of the Ponderosa, thinking
the fry cook looks like the lout
who held me down in fourth grade
for Linda Burman to kiss,
I can’t help but be aroused
by a woman in the next booth,
who says, “To a man, his…
from the poem “Proposition” by Arnie Yasinski

Arnie Yasinski came to writing poetry late. His first poems at 50 were inspired by a workshop with Paula Meehan at the Irish Writers’ Centre. Since then, he has published poems in more than four dozen U. S. poetry journals. This is his first collection.
He is from the U. S., born in Vermont and living in New England most of his life, but also spending several years in the Midwest and on the West Coast. He’s a father with a son, two daughters, and a stepson, all grown; and a grandfather, as well.  Holding a PhD in English and an MBA in Finance, for most of his career Arnie worked as a university administrator. Now retired and living permanently in Ireland with his Irish wife, Adele Carey, he is also interested in painting, especially oils.

​Arnie writes about his debut collection in an article published in Books Ireland online magazine Jan 2020
Proposition was number 4 in the top ten bestsellers in Hodges Figgis after launch.
I first met Arnie... the publisher, Alison Hackett's speech at launch in Poetry Ireland, 23 Jan 2020
Signed copies now available for sale