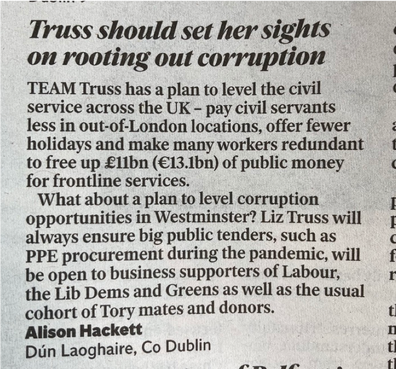 Team Truss has a plan to level the civil service across the UK.  Pay civil servants less in out-of-London locations, offer fewer holidays and make many of them redundant to free up £11 billion public money for front line services.
What about a plan to level corruption opportunity in Westminster?  Liz Truss will always ensure big public tenders, such as PPE procurement during the pandemic, will be open to business supporters of Labour, Lib Dems and Greens along with the usual cohort of Tory mates and donors.
Irish Independent 3 Aug 2022

That Liz Truss believes her success as a result of what she believes was a poor comprehensive school tells you a lot about her conservatism. She tells us that some of her class mates did not thrive in the state system, that they were let down by some teachers — yet she did very well out of it — so what’s so different about her? Is she smarter than them? Did she have more supportive parents? Is she naturally talented?
Her's is the ugliest form of class politics and a dog whistle to the red wall seats claimed by her party at the last election. To judge your peers who have not followed the same path as you (your definition of success) and turn them into victims of a failing state system — I’m not sure if she is blaming Labour or Tory councils here — is disgraceful.
I doubt many members of the Conservative party who will vote for their next leader will have been to comprehensive schools. Most will have been to schools where privilege and entitlement is ingrained.  I suspect this is the thing she is most angry about, her disadvantage at not really being in that exclusive boys' club.
Why doesn’t she join the Labour party? Or the Lib Dems? Neither of those parties would look down on her self-declared commoner status. And she would have much to add to their manifestos as she does seem to understand what it is like to be less privileged by education or family wealth.
Irish Examiner 29 July 2022 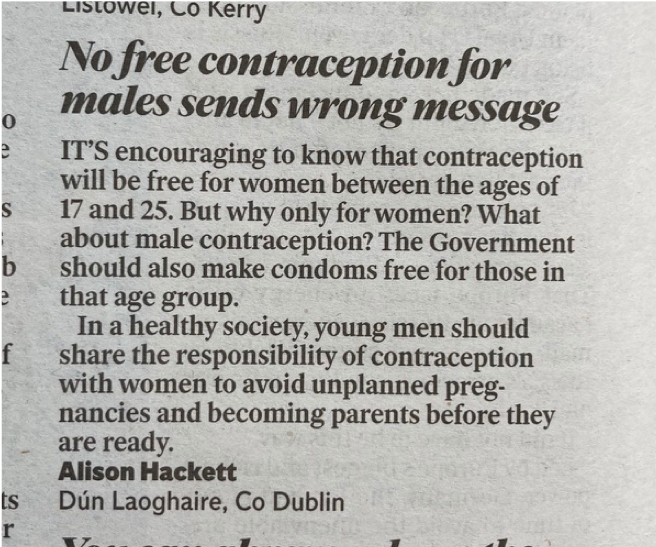 It's encouraging to know that contraception will be free for women between the age of 17 and 25.  But why only for women, what about male contraception?
The government should also make condoms free in that age group.
In a healthy society young men should share that responsibility with women: to avoid unwanted pregnancies; to avoid becoming parents before they are ready.
Irish Independent 28 July 2022

There is a dangerous gulf between the people and their law makers in most countries.  Going to the polls is charming, but an anachronistic conceit.  Turnout is rarely higher than 65% and can be as low as 45%.
Digital voting should be introduced in addition to the option to vote in person at a polling station.
Every bank and online business has a secure way of logging in — a ping to your phone, an email, a code that you fill in.  The same security would be needed around a voting app.  The success of the vaccination roll out effectively used people’s willingness to engage digitally — a brilliant example of why voting should go the same way.
The political parties and candidates would need to simplify their message knowing so many votes were going to be cast in clicks. Not a bad thing, in my view.  Getting the digital vote out would transform a tired system to something vibrant and relevant in a modern democracy.
Young people having a bigger say in their future (by voting on their smartphones)…. surely we can all vote for that?
The Irish Times; Irish Independent 5 July 2022 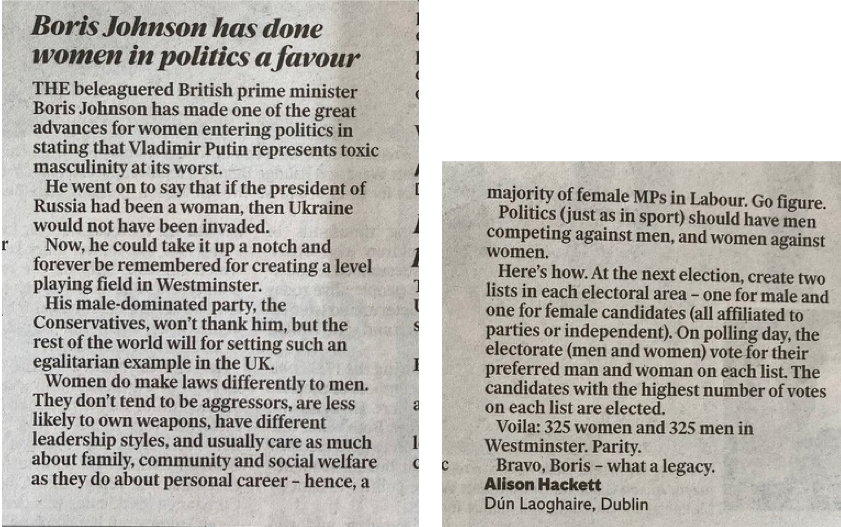 The beleaguered prime minister has made one of the great advances for women entering politics in stating that Putin represents toxic masculinity at its worst. And he went on to say that if the president of Russia had been a woman then Ukraine wouldn’t have been invaded.  Now, he could take it up a notch and forever be remembered for creating an even playing field in Westminster.  His male dominated party won't thank him, but the rest of the world will for setting such an egalitarian example in the UK.
Women do make laws differently to men. They don’t tend to be aggressors, are less likely to own weapons, have different leadership styles, and usually care as much about family, community and social welfare as they do about personal career — hence, a majority of female MPs in Labour. Go figure.
Politics (just like in sport) should have men competing against men, and women against women. Here’s how. At the next election create two lists in each electoral area - one for male and one for female candidates (all affiliated to parties or independent). On polling day the electorate (men and women) vote for their preferred man and woman on each list.  The candidates getting the highest number of votes on each list are elected.  Voila! 325 women and 325 men in Westminster. Parity.
Bravo Boris — what a legacy!
Irish Independent 5 July 2022 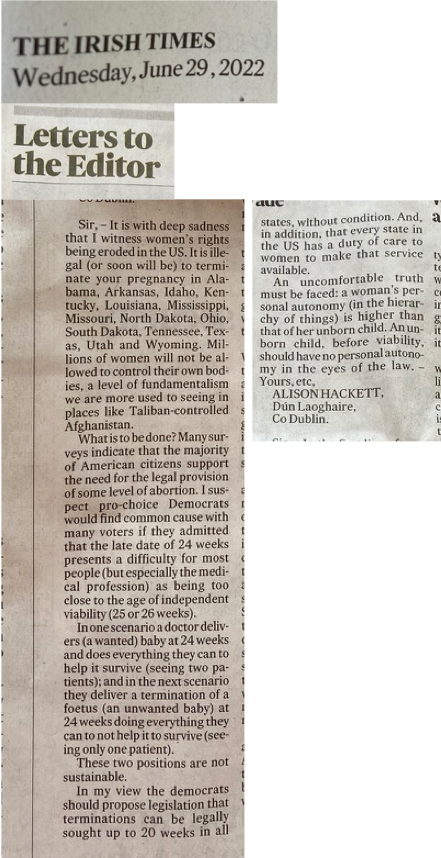 It is with deep sadness I witness women’s rights being eroded in the USA.  It is illegal (or soon will be) to terminate your pregnancy in these states: Alabama, Arkansas, Idaho, Kentucky, Louisana, Mississippi, Missouri, North Dakota, Ohio, South Dakota, Tennessee, Texas, Utah and Wyoming.  Millions of women will not be allowed to control their own bodies, a level of fundamentalism we are more used to seeing in places like Taliban-controlled Afghanistan.What is to be done? Many surveys indicate that the majority of American citizens support the need for the legal provision of some level of abortion. I suspect pro-choice democrats would find common cause with many voters if they admitted that the late date of 24 weeks (á-la-Roe-v-Wade) presents a difficulty for most people (but especially the medical profession) as being too close to the age of independent viability (25/26 weeks).
In one scenario a doctor delivers (a wanted) baby at 24 weeks and does everything they can to help it survive (seeing two patients); and in the next scenario they deliver a termination of a foetus (an unwanted baby) at 24 weeks doing everything they can to not help it to survive (seeing only one patient).
These two positions are not sustainable.
In my view the democrats should propose legislation that terminations can be legally sought up to 20 weeks in all states, without condition. And, in addition, that every state in the US has a duty of care to women to make that service available.
An uncomfortable truth must be faced: a woman’s personal autonomy (in the hierarchy of things) is higher than that of her unborn child. An unborn child, before viability, should have no personal autonomy in the eyes of the law.
The Irish Times; Irish Independent 29 June 2022 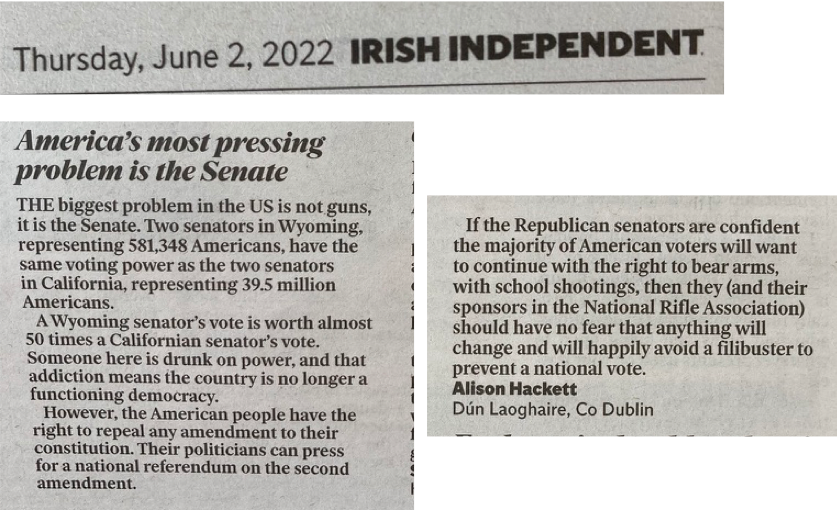 The biggest problem in the US isn’t guns, it is the Senate.  Two senators in Wyoming, representing 581,348 Americans, have the same voting power as the two senators in California representing 39.5 million Americans.  A Wyoming senator’s vote is worth almost 50 times a Californian senator’s vote.  Someone here is drunk on their power — and that addiction means the country is no longer a functioning democracy.
However, the American people have the right to repeal any amendment to their constitution. Their politicians can press for a national referendum on the second amendment.
If the Republican senators are confident that the majority of the American voters will want to continue with the right to bear arms, with school shootings, then they (and their sponsors in the NRA) should have nothing to fear that anything will change and will happily avoid a filibuster to prevent a national vote on the issue.
Irish Independent 2 June 2022; Irish Examiner 4 June 2022
Can you imagine a group in Russia marching into the Duma to challenge Vladimir Putin’s authoritarian control?It wouldn’t happen.
Can you imagine a crowd bursting into the central headquarters of the Chinese Communist Party government buildings in Beijing to demand freedom? China and Russia should be concerned that their own citizens will be envious of the liberal democracy in the US that can bear such a stress test. The 18th century philosopher Edmund Burke said, “The only thing necessary for the triumph of evil is for good men to do nothing.” The congressmen and congresswomen must do something now about the threat in their midst.
Irish Examiner 13 Jan 2021