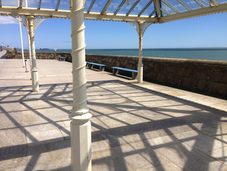 A chunk of steel-blue sea under endless blue sky is framed by the off-white terraces lining Mellifont Avenue; it draws me down, down to the sea in this town of kings, Kingstown, Dún Laoghaire. The east and west piers reach out in a wide embrace, granite arms of a sleeping giant. Over the pier’s walls Howth hill beckons ending the wide sweeping curve of Dublin bay. Looking back inland the Sugar Loaf is a clear outline, a mini Vesuvius, amidst the undulating hills. Victorian terraces, port structures and a triple of spires – the Mariner’s church, St Michael’s tower that survived the 1896 fire and the Town Hall clock – all jostle for position along the seafront. Open space and urban life in peaceful juxtaposition.

Terrace living for hundreds, an exercise in tolerance. Dog barking, baby mewling, piano tinkling, hammer thumping – no matter – live and let live. The daily ‘hi’, ‘how are you?’, ‘grand’, ‘weathers good’ oiling a community spirit not often articulated yet mostly felt; the liberal left-leaning politics of the town emerging when the nation votes: Dún Laoghaire ‘bucking the trend’ or ‘leading the way’ depending on how you look at it. Ann in the flower shop; John in the corner shop with a world wide web of newspapers yellowing in the breeze outside – Le Monde and Die Zeit sitting cheek by jowl alongside the Longford Leader and the Anglo Celt. This is a town where not everyone knows your name but some people do.

Walking. Walking to the DART, to the bus, to buy milk, for a coffee on the seafront, to post a letter, to the library, to the theatre, to the cinema, to the uniform shop, to the hardware store, to the hairdresser – everyone in Dún Laoghaire walks and everyone talks.

I walk the pier in all weathers, once with packed snow right to the end. The icy wind and white cloaked stone set against near-black sea sears a flash of the Baltics onto my brain (St Petersburg for a moment?); six months later a hot summers day: warm honey coloured granite and a salty wind whipping the yachts’ wires clanking against their masts and I am suddenly on a Greek island. Was this what Joyce was thinking over a century ago when he looked out from the martello tower at Sandycove (glimpsed just along the coast)? Was it then that Leopold Bloom was born, destined to spend the16th June wandering Dublin in an echo of Odysseus’s epic journey on the Ionian sea?

It’s a clear night and once again I walk towards the sea, the pier, my homing point. I tread softly on the footsteps of thousands before me. The lights on Howth hill wink from across the darkness of the bay. Near, yet far. The sea is in my bones; my bones won’t last too long inland. Cities on the sea – San Francisco, San Sebastián, Boston, Barcelona, Nice and Naples – they all whisper to me in Dún Laoghaire.