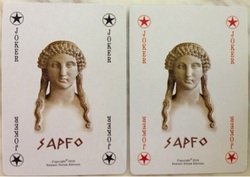 The card that Sappho was dealt 01 July 2014
A scene on a beach in Greece a couple of weeks ago: a young boy of about six is playing in the sand near the edge of the sea. A couple of metres away, his sister (about three), is fully absorbed in packing wet sand over her seated half. The boy is all action, dashing into the water a couple of times, charging back out, burrowing in the sand, flinging some into the water, all the while eyes darting, checking out the action on the rest of the beach. Then, having studied his sister’s intense absorption for a moment – and I can almost see his mind working - he takes a handful of damp sand and throws it towards her. She feels the splats of sand, looks up to see where they came from, and, once she realizes, grabs her own lump of sand and throws it back.

At first he looks excited by the prospect of a sand fight - and I can see his frustration when it isn’t forthcoming – but she reverts to concentrate on her own sand sculpture game. A few moments pass. Then, sneaking a glance at her he forms a plan. Scooping up a hand full of damp sand, he scrambles up and starts to run. As he’s passing over her legs he pauses just long enough to push the handful of wet sand directly onto her face – and then races off along the beach. She cries; she shouts; she wails to her parents; but she doesn’t rise to fight. She tolerates the insult. Despite my empathy for the girl (and what must be an early lesson in the internalization of her anger at the ‘boy’s world’ she inhabits) I’m amused at the boy being a boy – he’s just looking for action. However, if I reverse the roles, no matter how hard I try, it doesn’t work.  I cannot ever imagine a six-year-old girl, unprovoked, shoving wet sand in her younger brother’s face.

Segueing to the adult world of men and women, David Mamet’s play Glengarry Glen Ross has an all male cast. I didn’t realize this until last year when seeing it for the first time. With no idea what it was about, when we’re seated in the theatre, I ask if there are any women in the play. No. My response was something on the lines of “For Christ’s sake! No women. Typical. Doesn’t even pass the Bechdel test!” (a test which concerns whether a work of fiction features at least two named women who talk to each other at least once about something other than a man).  In my own mini-survey on this theme I once checked, in a national newspaper, the film listings for roles allocated to men and women.  Not one film was listed which had a majority of female parts and if memory serves there wasn’t even one film with a solo female lead.

Despite my misgivings the testosterone-fuelled swearing and shouting in the second act of Glengarry Glen Ross has a potency and urgency that brings the play to fever pitch. It is very entertaining, I reluctantly admit to my companions. But, it does get me thinking. What kind of a play might it have been if it were written by a woman for a female-only cast?  Longer. A lot more verbal gymnastics and sulky silences (not to mention trips to the loo). But I jest. Theatre needs dramatic tension to make it, well, theatre; and this means conflict of some sort, internal or external. The latter we women tend to avoid with remarkable dexterity whilst with the former we could launch ships; however few plays give the fullest expression to internal female conflict. Medea possibly, but the tension is all in relation to her husband’s actions. How about an all-female cast (set in an all-female business) with an opening soliloquy: “To mother or not to mother, that is the question - ”?

As I’m here in the land of the ancient Greeks I buy a pack of playing cards titled ‘The Philosophers’ and wonder if there will be any answers to this age-old gender conundrum. Of the fifty-four Greek philosophers, writers and poets represented in the pack (for example Democritus is the five of clubs, Homer the two of hearts, Plato the ace of diamonds, Aristophanes the jack of spades) fifty-two of them are men.  Two are female. My heart falls and I despair. Sappho has been dealt the joker, twice.