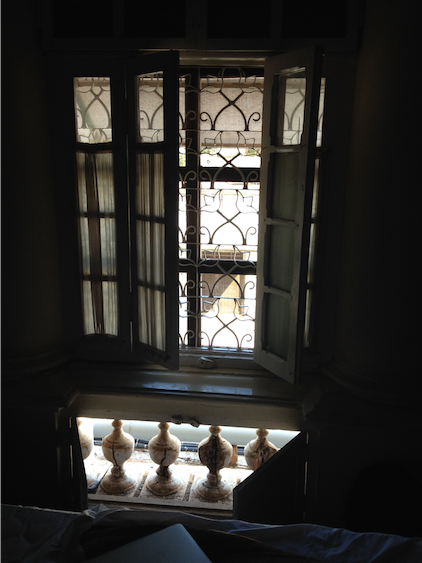 window in the Green Hotel, Mysuru, India
​I wake early to unfamiliar bird song – whoops, trills and tremolo flutes – and a bawling cat; in the background the relentless beep and toot of traffic grinds past the front of our hotel.  Turned into film studios in the 1950s, the Green Hotel in Mysuru was first the palace of a Maharajah and later a colonial home.  The Raj must have been served their gin Gimlets (still listed on the cocktail menu) on the veranda under the gently rotating rosewood ceiling fans.  J tells me that gin (and sin) was the downfall of the East India Company.

On our way here it was impossible not to despair at the damage being done to the social good as India's clogged road arteries cut a swathe through city, town and village: an homage to the car that the West has spawned.  A second tier of motorway into Bengaluru is being built, but, much like the rest of the city, it appears to be an abandoned building site – I saw few workers.  Rusting iron carcasses, slabs of concrete, plastic and rubble detritus is strewn everywhere on the verges of the road. Huge reinforced concrete trunks sunk into the ground, their internal steel bars poking out of the top, like bristles on a hairbrush, waiting for a motorway to connect them.   A woman in a bright sari walks along the side of our three lane carriageway. The footpath is too churned up for practical use.

Motorbikes and scooters abound.  Used to carry anything from large loads of hay or sugar cane to huge bunches of coconuts, watermelons, plastic gourd containers, pots and pans, and, quite often, a whole family.  Riding side saddle on the back is the woman in a sari, one child sandwiched between her and her husband, the driver, and another child tucked in front between his arms under the handlebars.  None wearing helmets.  Another woman rides side-saddle while carrying her infant behind her husband.  I hope the red dot on the child’s forehead is a talisman for good luck.   Scooting past our car, two men ride pillion – the one behind has his left arm slung over the shoulder of the driver, draping down across his front, seatbelt style, relaxed.  I wonder if they are intimate.

As we drive deeper into rural India the women carry loads on their heads, wearing saris in bright orange, pink, green, embroidered with gold, rich against their dark skin.  It reminds me of yesterday, when I went shopping in central Bengaluru, extremely conscious of my pale foreigner flesh as I stepped onto the thronging street

“This way Ma’am. Where are you from?”

The man points me down the steps to the shops running in an arcade beneath street level.  Below, the man at the door beckons me in.  I’m only just out of the car.  Hold on there Bald Eagle, I want to say, I need to get my bearings.

I hold my hands together in prayer and bow:  “Namaste.  Namaste. Thank you. Thank you. Namaste.”  Shadowing me all the way down the street, the first man constantly asks questions.  I cross to the other side. Every shopkeeper is beckoning me in to their premises. I try not to make eye contact.  The press of people engulfs me.  A woman completely shrouded in black clothes walks fast towards me hand thrust out; no slits for her eyes, soft black material falling in folds hiding her face, like one of those veiled marble statues.  "Rupees. Rupees." I’m frightened.  She is like a ring wraith.

The first man appears again he followed me across the street?  He offers to take me on a tour up to the Parliament houses.  “No thank you. No thank you. Namaste.”  I tell him that I have a driver and don’t need a guide.  Visibly annoyed he walks off.

The pashmina scarves on a railing catch my eye.

A young Kashmiri man runs up the steps from his shop in the basement.  The first guy pops back into the frame what is it with this guy? and the wraith woman appears again, her hand thrust out.  The two men bat her away, dismiss her with a shove.  Get lost. She’s ours.

As we drive away I get the feeling that the entire street has been in on it.  All the vendors knew that I’d go into one shop, spend about a hundred times more than any local ever could, and they’d all get a cut.