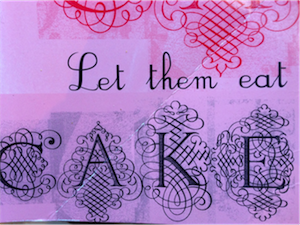 LET THEM EAT BRIOCHE
A certain fine food emporium that I frequent uses a well known character from French history to decorate its packaging: an image of Marie Antoinette appears on the side of the cardboard boxes, with the words “Let them eat cake” in a decorative graphic script.  The quote has been unfairly pinned on Marie Antoinette, but, I'm their target demographic: hungry; in a hurry; money in my pocket.  I take the cake.

I am conflicted though. “Let them eat cake (because they haven’t got bread)” is a bit of an insensitive marketing theme these days. Were no historians on the branding team?

“Qu'ils mangent de la brioche” (Let them eat brioche) was first written by the philosopher, Jean-Jacques Rousseau, no later than 1769, when Maria Antonia was a thirteen year old girl living at the Hofburg Palace in Vienna. She was the fifteenth child of the Hapsburg Empress, Maria Theresa and Holy Roman Emperor, Francis I.  In 1770, her marriage to Louis Auguste, heir to the French throne, was arranged for political reasons. Marie Antoinette, as she would thenceforth be known, was introduced to her prospective husband, for the first time, two days before the wedding.

She was fourteen. He was fifteen and shy.  So it is not surprising that the bedding ritual at Versailles was observed to be unsuccessful. The non-consummation of the marriage for the next seven years frustrated all the interested parties. A couple of teenagers were responsible for the great union of France and Austria that their marriage symbolized. It had to work. This was politics.

But back to Rousseau’s autobiography, Confessions.  He does refer to a great princess in an anecdote about a time he had stolen (yes, stolen!) some wine and wanted to have some bread to go with it. However, he felt he was too elegantly dressed to go into an ordinary bakery. So he justified to himself going into a more expensive cake shop to buy brioche - a sweeter, richer form of bread.  “Finally," he writes, "I recalled the stopgap solution of a great princess who was told that the peasants had no bread, and who responded: 'Let them eat brioche'.”

Confessions was published posthumously, in 1782, as the French revolution was hotting up. Even then no one would have been sure which princess he meant or would have bothered to check the quote. Much easier to pin it on the spoiled and unpopular Marie Antoinette, Queen of France and Navarre, who wanted to bathe in her enemies blood; had a lesbian affair with an English Baroness; conspired with France's enemies, especially her native Austria; and depleted the national treasury.

By the time of the Storming of the Bastille her reputation was in tatters. Known as Madame Déficit, anti-monarchists said that she had single-handedly ruined France's finances.  She was also implicated in a crime to defraud the crown jewellers of the cost of a diamond necklace. At her trial she was accused of conducting orgies in Versailles and planning the massacre of the National Guards. The most devastating part, must have been, when her son, Louis Charles - who had been removed from her and put in the control and command of the French Commune – became her accuser adding incest (with him) to the list. Her lawyers had less than a day to prepare her defense.

Her husband, the ex-King Louis XVI had been taken to his execution in a carriage. Marie Antoinette was put in an open cart for the hour-long trip to the guillotine in Place de la Révolution. Aged thirty seven, in a white dress, hair shorn, hands tied behind her back and on a leash, she could hear the crowd screaming “Autri-chienne! Autri-chienne!” (Austrian-bitch! Austrian-bitch!).

Her last words, it is reported, were “Pardon me, sir, I meant not to do it,” to the executioner, whose foot she had accidentally stepped on after climbing to the scaffold, just after noon on the 16th of October 1793.