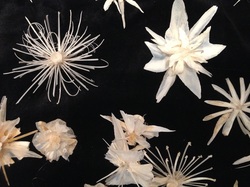 I spent this morning invigilating (policing actually, sans uniform) at the RDS exhibition of the Student Art and National Craft Awards. This diverse and engaging array of art and craft is all home grown – just what we need during these globally troubled times.  I was delighted to see that Julianna Szabo (whose clever design concept for The Boston Tea Party was adapted for the 1770-1775 pages in The Visual Time Traveller) has some striking work featured: a three dimensional paper cut illustration of Dublin City centre with Stephen’s Green and Grafton Street.

A sculptural series by Camilla Hanney (section pictured left), constructed from desiccated fish bones and displayed in an antique chest, is called Fish out of Water (not for sale so don’t get too attached). The pieces look like delicate shells - ethereal and beautiful.  On the craft side Fiona Harrington’s Deserted Cottage is the Lace category winner – her framed abstract landscape, which uses both a traditional and unconventional approach to lace, is a fine-tuned balance of design, art and craft.  Sorry, too late. Already sold.  I also set my eyes on Saidhbhín Gibson’s semi-decomposed holly leaves ‘mended’ with needlepoint lace, which mimics the decorative venation of the leaves. Alas (but no surprise) that one gone too.  The RDS Award of Excellence went to Eleanor Irwin’s A cabinet of Natural Curiosities: wasps, bees, mineral rocks, butterflies, sea coral and cacti are created out of cotton threads and thin copper wire crocheted and embroidered in layers.  Up close these are simply stunning.

But the compassionate piece that almost moved me to tears I must write about. This is not a piece that a photograph conveys well – the photograph reduces it to a two dimensional grotesque. It is only by seeing it live and experiencing it that you can come to your own conclusion, and reflect on your own personal reaction.  Consequences of a Life Lived is the title Conor Frizzelle gives to his installation. It is a representation of an old Irish bachelor’s house by way of a room, but exposed to us as half-a-room, into which we stare, like on a film set; so we are at once the viewer and the voyeur.  The inspiration for the work comes from Conor’s uncle who lived alone all his life (this info is in the catalogue notes). In this room there is the life-sized model of a man sleeping in an arm-chair, head thrown back, mouth agape; he snores gently, his head also moves gently.  Around him there is a scene of neglect in a gathering pile detritus. A cigarette burning down between his fingers has a teetering totem pole of ash about to fall off - and this same ash grey dust lies embedded in and around his fingers, just where thousands of other cigarettes have been. Time is standing still in this snapshot. Papers are strewn on the floor, old records, empty bottles, dirty plates; a typewriter on the table; an airmail pen-written letter on his lap is about to slip to the floor.  But, it is the massive tumorous growth pouring out of the back of his head - a lumpen veined ugly mass contained within his skin, twice the size of his head and stretching towards the floor - that is profoundly shocking and disturbing. It is hard to believe that such a growth could be possible.   I watched others viewing the exhibit, the sadness etched on their faces as they grappled with the story being told and what it meant; that it wasn’t a fictional horror story; it was a representation of a life known.  And I wonder if the artist had, as a young boy, witnessed his uncle in this state, and later, in trying to make sense of the world through his child’s eyes, the depiction became a gross exaggeration. But I fear it is actually close to the truth; this is the world of his uncle; it’s as close a representation as he can get, in making this documentary piece. I am struck that this is how this artist wants to express himself: in this honouring of his uncle’s story, warts and all. An existential loneliness pervades this piece. We are all alone; and we only meet others on the bridges that we sometimes build between our islands.  See it if you can. This is art of consequence.